The PCC’s report in January stated that an apology and compensation of £5,000 be made to KTV Ltd by the Falkland Islands Government (FIG) for the interference they experienced. That has now been agreed by the Executive Council and the recommendations have been accordingly implemented.

The Executive Council’s response to the January 2020 PCC report may be found here:

“It is considered that the PCC’s report sets out a fair and balanced account of the events which led to the interference suffered by KTV’s customers. It is accepted that this does amount to maladministration and it clearly caused injustice to KTV Limited. It is therefore recommended that the PCC’s recommendations be accepted and actioned at the earliest opportunity.,,,

…It does seem that a conscious choice was made not to prioritise management of the radio spectrum (presumably with insufficient appreciation of the potential consequences), and that this carried with it the risks of interference.”

Take a look at FITV’s report on the findings: (Source: FITV)

The full ‘REPORT OF THE PRINCIPAL COMPLAINTS COMMISSIONER’, KTV Ltd v. The Falkland Islands Government can be downloaded here.

As an update to the 4G interference issue, the following article is from the 10th January 2020 Penguin News. 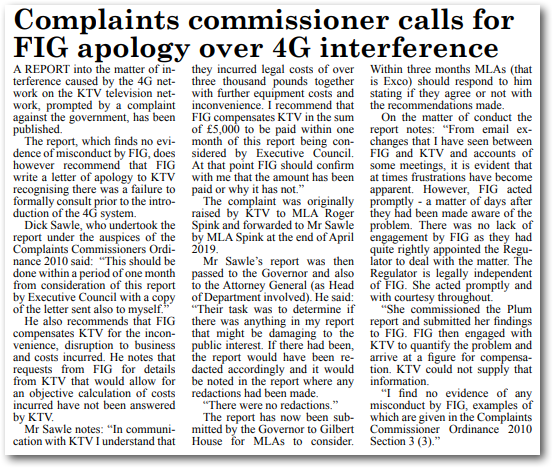 The following article is from the 17th January 2020 Penguin News. 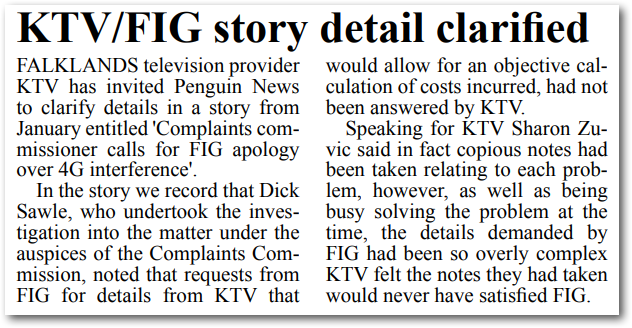 This post is concerned with a particular issue arising from the introduction of the 4G mobile phone service in the Falkland Islands in 2018. 4G was introduced with great fanfare as it was a principle Key Performance Indicator (KPI) of the exclusive telecommunications licence issued by the government. The 4G upgrade was undoubtedly a significant engineering task as it was not a greenfield installation. The ‘legacy’ 2G mobile service had to be kept alive during the upgrade, even as all the service infrastructure was swapped out. The upgrade would have been no mean technical feat I would imagine. 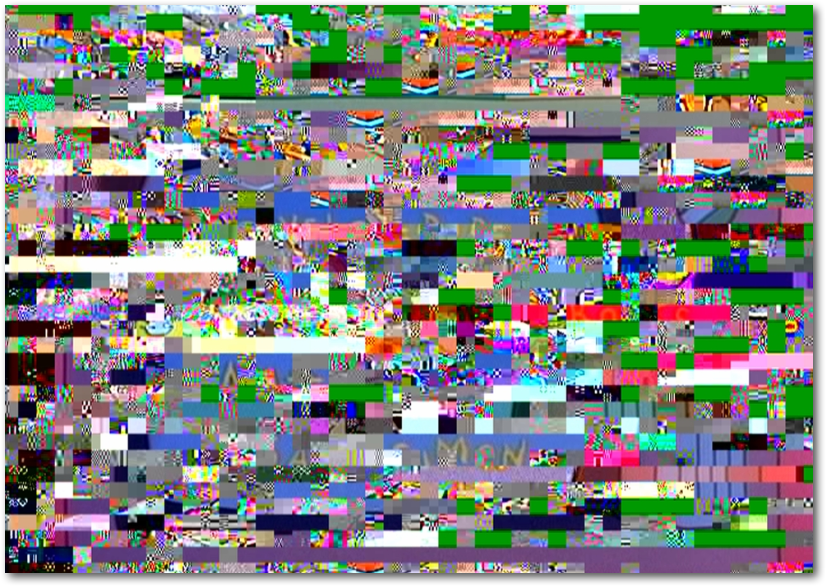 4G interference on a digital TV
Credit: at800 web site

The roll-out of 4G, although several issues were encountered, went well and was positively received by islanders as a long-overdue upgrade. I wrote about this in a May 2019 post – A peek under the bonnet of the Falkland Islands’ 4G service: Part 2, Falkland Islands 4G.

One significant benefit to consumers was that the 4G data service was much improved over the 2G mobile network, enabling the reception and transmission of emails while out and about. This benefit may be seen as old hat in the UK, but it was a significant step forward for Falkland Islands’ consumers and businesses

So what is this post about if the launch of 4G went well? It’s about a particular technical consequence of upgrading to 4G in that it caused a significant issue with another widely-used consumer service in Stanley – subscription TV.

The issue is concerned with interference by 4G to subscription Digital Terrestrial TV (DTT) viewers.

It is a long-standing and well-known issue in the mobile phone industry and regulation departments worldwide that the introduction of 4G may create interfere with existing digital TV services. The possibility is considerably increased if the lowest licensed mobile-phone spectrum (800 MHz) is chosen for the 4G service as was the case in the Falkland Islands.

The selection of this spectrum is actually an optimal engineering choice to make as it increases 4G cell coverage when compared to using a higher frequency spectrum. The use of 800Mhz reduces the number of cell sites required to cover particular geography. The choice also reduces the capital expenditure of the upgrade programme. There is nothing technically or commercially wrong in this choice and was the right decision to make for the Falkland Islands.

However, the choice of the 800MHz spectrum considerably increased the possibility of interference with existing TV services, which use the same bit of spectrum. In actuality,  the 4G spectrum lies side-by-side with the spectrum used by TV services.

If a higher frequency mobile spectrum allocation had been chosen, then the possibility of interference would have been considerably reduced. However, that would have increased project capital expenditure costs.

The image below shows where TVs could be subject to interference close to 4G base-station towers – these are known as the ‘degradation’ and ‘overload’ zones. 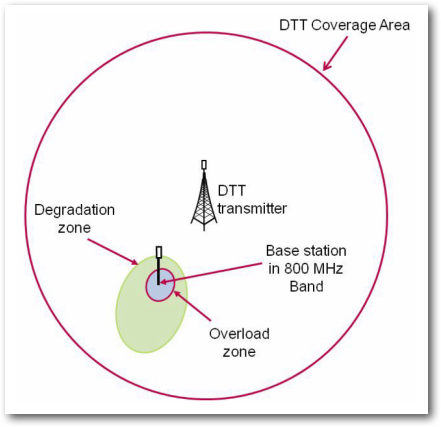 Possible interference to TVs from 4G was such a well-known issue in the UK, that before the launch of 4G, the government and the UK telecommunication regulator, OFCOM, implemented a cross-industry programme to ensure that the possibility of interference from 4G was minimised.

Several broadcast TV organisations, such as the Digital TV Group (DTG), were tasked by the government to manage this activity A £180 million fund was ordered to be created in 2012 – “A £180 million help scheme will fund solutions to TV signal interference resulting from new mobile services.”

The key elements of this programme were:

In the end, the programme was successful and all the issues and interference cases that arose were appropriately addressed, managed and corrected.

A family of at800 filters were developed that could be plugged into the aerial socket of TVs for use in the case of light interference. OFCOM stated at the time:

“…experience suggests that filters offer protection against unwanted signals. However where 4G has been found to cause visible interference this has often been indicative of aerial systems not providing adequate TV signal strength and/or quality.

The use of simple aerial filters did correct many cases of interference but there were many instances where they were inadequate.

A lot of time, money, effort, meetings and resource were spent pre-launch on 4G interference. The result according to OFCOM and the DTG, was that there were fewer cases of interference than predicted, but that was put down to the high level of pre-launch work and the wide-scale publicity that was undertaken.

The programme is still ongoing in 2019 as more spectrum is being freed up for UK 4G services. 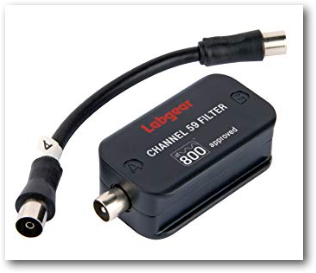 An example at800 4G interference filter

In short, there wasn’t one.

None of the pre-launch initiatives that took place in the UK was undertaken in the Falkland Islands even though it would have been on a much smaller scale.

Interference to the Falkland Islands’ subscription TV service only came to light when the trial 4G service went live in 2018.

The at800 filters, used in the UK programme, did cure many of the interference issues in the Falkland Islands, but there were cases where they did not. TV antennas had to be moved or upgraded. Mast-head TV pre-amps had to be discarded or replaced. According to the subscription TV operator, all of this took a considerable amount of time and resource, as all customer complaints needed to be resolved very quickly to restore good TV reception.

Long-term removal of possible 4G interference necessitates that the subscription TV service infrastructure is significantly enhanced by installing higher power transmitters and swapping out transmitter antennas to increase the strength of received TV signals around Stanley.

If the subscription TV service operator had been given sufficient notice about the possibility of interference from the 4G service, the infrastructure could have been upgraded before the launch of the 4G. This would have minimised the opportunity of interference being experienced by viewers. No such notice was provided by any of the parties involved in the 4G programme.

It could be thought that the possibility of interference will be reduced when formal ‘spectrum management’ is introduced? However, spectrum management is not merely about allocating and managing spectrum.  Far from it.

In the Spectrum Management Framework for the Falkland Islands issued on the 12th December 2018, states:

4.2 It is important for both the social and economic development of the Falkland Islands that it has a Spectrum Management Framework (SMF) that delivers efficient use of radio spectrum, minimises the potential for interference, is simple to administer and can keep track with the changes to spectrum using services.

8.1 As the economy and population grows and connectivity improves the number of connected devices will grow and the instances of interference will increase if appropriate spectrum management isn’t implemented.

9.1 Relying on an ad hoc approach to spectrum management (the current status quo) will result in an increased risk of interference and the associated impact on services using spectrum…

All of these are admirable objectives and are quite correct, but government management of spectrum must extend well beyond this and involve pro-active involvement where interference occurs. Spectrum management also involves a professional and moral responsibility to bring all the involved parties together on a face-to-face basis to resolve issues by acting as an independent mediator. The aim of this is to achieve an amicable and workable solution for the affected parties. This is how interference issues had always been resolved in the Falkland Islands before the current regime.

Interference can still occur even though appropriate standards are used by both the party interfering and the party interfered with, as in the situation discussed here. It is not relevant whether ordinance or licence laws are breached or not as it’s a technical matter.

Pro-active involvement is how OFCOM operates in the UK confirmed by personal discussions about the UK’s 4G programme with OFCOM and the DTG. Formal spectrum management in the Falkland Islands is a pointless exercise and cost without pragmatic active involvement. There is no room for a hands-off approach.

When considering the circumstances of the TV interference suffered by the introduction of 4G in Stanley, it is clear that in respect of the 4G operator, no breach of licence or law took place. This assumes that the 4G equipment deployed met all appropriate technical standards. I would have no reason to doubt that it did.

Was it down to a non-understanding of the seriousness of the issue by the involved parties? Was it down to bureaucracy? Was it thought that involving the subscription TV operator would slow down the 4G project? Was it just forgotten about? Or was it due to some other reason? Whatever the reason, this represented a serious oversight that directly led to subscription TV viewers to suffer interference.

The issue arising here is not a legal one, but a technical, professional and moral one about what steps the parties involved in the 4G programme should have undertaken with the knowledge they had.

Just as importantly, even though no ordinance or licence laws were breached, the parties involved should have brought the 4G service operator and the subscription TV operator to the table with mediation even on a post-facto basis. The objective being to find the optimum way forward to resolve the situation. And, more importantly, to ensure that it could never happen again even if the 4G network is extended in the future. This was not done either in spite of requests to do so.

The number of organisations transmitting RF in the Falkland Islands can be counted on one hand, so why was this first significant case of consumer service interference not handled more professionally by the parties involved?

Unless the lesson that active involvement in cases of interference is required, it does not bode well for the next serious case of interference when it arises; whether or not a Spectrum Management Framework exists.

Disclosure: I have had full visibility of what has taken place and have been involved in drafting some of the documents, on a pro bono basis, forwarded on behalf of the subscription TV operator to various parties. It would not be appropriate to talk about the contents of these private communications here, so I’ll only provide an overview and leave it up to the readers to reach their own conclusions about the matter. The views expressed herein are mine alone.