In the previous two posts on OpenFalklands I focused SAEx submarine cable connectivity to St Helena as a successful St Helena Government program and the possibility  of a submarine cable to the Falkland Islands by extending a Chilean Fibra Optica Austral cable. It is fair to say that the latter is probably not achievable but who knows how things can change in ten years?

This leaves but one option of improving the user experience of the Falkland Islands’ broadband service in the relatively near term. And, that is satellite technology. Interestingly, although I’ve been bleating on about satellite capacity (bandwidth) for years (as have many others) I really believe that there is a higher priority activity where investment should go to improve the Falkland Island broadband services. I will address this key issue shortly in an up and coming post.

I want to talk about the interesting subject of satellites and increasing satellite capacity, but as I will be talking about Mbit/s and Gbit/s and such like, a review of today’s situation would be a good place to start and position things.

I guess most islanders are aware of the recent increases in the Intelsat capacity that were specified as KPIs (that is Key Performance Indicators) that the local ISP was mandated to deliver in the exclusive licence issued by FIG. Specifically these were:

“The negotiation regarding licence renewal should be conditional on Sure’s commitments to expand the international capacity”.

This was a particularly sensible though obvious recommendation – another is:

“We recommend a moderate uplift usage scenario, with 400-500 Mbps capacity by the end of 2019 which would allow dramatic increases to the data caps”.

Calculating what satellite capacity should be to maintain a status quo of a user experience in spite of higher access rates and increased monthly quotas (both KPIs) can be, in its simplest form, quite a straightforward engineering calculation. Note: I’m not saying that the current user experience is acceptable.

These standard calculations are based on logarithmic increases (these should be user-noticeable increases) in satellite capacity so when plotted on a graph with an algorithmic axis, it will be a straight line. This is clearly demonstrated with Falkland Islands satellite capacity from 2004 to 2018 as in the graph below. These increases have had a positive impact.

An interesting inflexion or deviation from the straight line can be seen in the 2019 KPI increase to 220.5Mbit/s. The blue line shows actual satellite capacity; while the red line shows the satellite capacity using the same engineering calculation that have used from 2004 to 2018. The 2019 satellite capacity represents a shortfall to the ‘expected’ or ‘natural’ increase to 350Mbit/s which would be more in line with Cartesian’s recommendation. There could be several reasons for this but this is not the place to delve further.

Using the straight line calculation and assuming 2019 is an anomaly, the appropriate prediction for satellite capacity by 2024 should be 1Gbit/s.

However, will increasing the satellite capacity bring the islands up to par for user experience as experienced in terrestrially connect countries? Well no, is probably the correct conclusion at this time. What capacity would achieve that you may well ask? I’ve heard that question asked a lot while visiting the islands over the years.

I’m very pleased to see an initiative is currently underway to understand how Falkland Islanders use the internet and use this data to better understand the satellite capacity needed going forward by sector. Again, I will address this in more detail in a future post but for now, to use a well known expression it doesn’t take the skills of a brain surgeon to get a pragmatic view on this.

The graph below shows the number of Falkland Island broadband customers in 2019. In effect, these can be considered to be households, rather than individuals. Since 2014, the number of households has increased to 1361 in 2016 (FI census data) to more than 1900 in 2019. (This does not include business users). 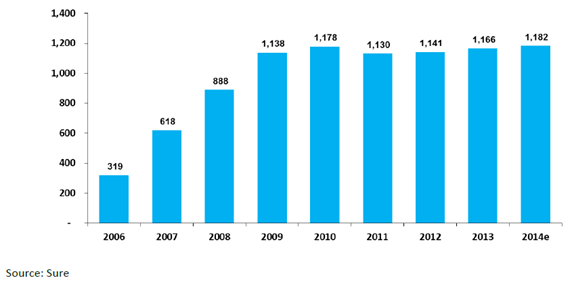 The users of the islands’ broadband services know better than anyone what their experience is which, for understandable reasons’ is far behind any country connected to the Internet by terrestrial or submarine cables.

Let’s succumb to crude simplification for a minute. One of, if not the, biggest consumer of capacity is streaming videos services such as Netflix and Amazon. What satellite capacity would be required for a percentage of islanders to snuggle up on the settee of an evening and watch a movie? This is pretty standard these days I think with the decline of time-scheduled broadcasting. The calculation below ignores the fact that usually several family members using a streaming video service at the same time in different rooms.

So how many of those 1100 broadband householders would want to watch a film simultaneously streamed from abroad? How long is a piece of string?

Nobody watched SD quality videos in 2019 so let’s look at HD quality.

The calculation would be 1100 x 10% x 5Mbit/s = 550Mbit/s and remember this would need to be highly reliable connection with no dropouts if any movie or live action is to be enjoyed. What percentage would watch a football match?

This equates to twice the existing satellite capacity and is clearly unsustainable as ‘fair usage’ of the Internet by the other 90% (and by 4G users) would be zero.

It is a truism to say that is no optimal or minimum satellite capacity that would satisfy the needs of Falkland Islanders as any increase would always be absorbed and used.

Does this mean that the use of streaming video services would never be viable on the Falkland Islands? The answer could be yes or no depending on what actions are taken.

For example, even back in 2014 the Cartesian report referred stated:

“As part of this exercise, Sure should also prepare a detailed CDN and transparent caching review to assess the implications for international capacity requirements.

Transparent caching and CDN (Content Delivery Network) are two solutions which could reduce the international traffic requirements. Transparent caching dynamically stores popular content in local servers, while a CDN solution consists of a locally hosted server which stores the pre-set content (e.g. video), and requires specific partnerships with content owners or third party content distributors. CDN would require zero-rating of the traffic rom/to the CDN storage server. Customers would subscribe to this service, providing Sure with an additional revenue stream while ensuring high degrees of customer satisfaction.

Sure already has some limited caching capabilities, and has arguably implemented a mini-local CDN service in the past to host specific content (e.g. TV footage of the Commonwealth Games).

We recommend that Sure initiates discussions with potential transparent caching and CDN providers, to assess the viability of these solutions. This should be part of Sure’s wider contents trategy definition, which would include a detailed traffic profile assessment to estimate the proportion of traffic that could be delivered via transparent caching and CDN services”.

Ther have been no public discussion on these issues in the last five years as far as I am aware?

There is much that can be done to improve islanders’ experience of on-line broadband services. Most of these do not simply rely on increasing satellite capacity. What is needed is to ameliorate the effect of low satellite capacity not just suffer its consequences by chasing a moving goalpost.

It’s interesting to look back and see how things have improved over the years. This is Cable & Wireless announcing an increase of capacity from 6Mbit/s to 8Mbit/s in 2009.

If you have found this interesting, please register on the site and forward the links to those that may be interested.

5 Replies to “The enigma of Falkland Islands satellite capacity”