The Falkland Islands Communications Regulator has directed Seba, VP8/SQ1SGB to cease his amateur radio operation from Halley Research Station, Antarctica forthwith. This post shows the email exchange that is currently taking place with the Regulator. 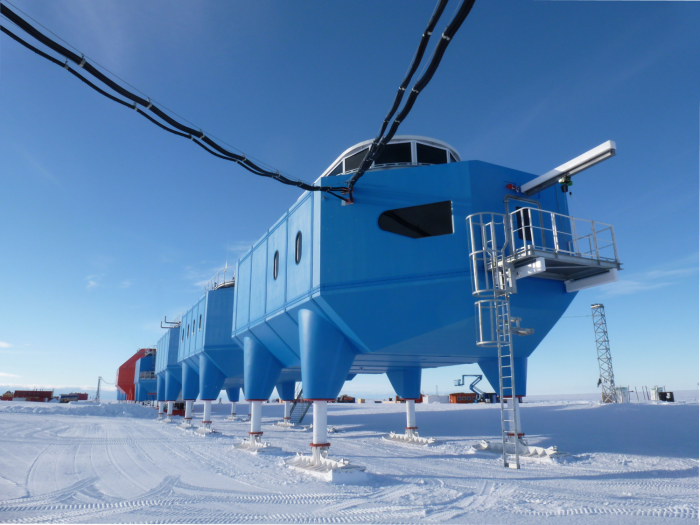 OCTOBER 11, 2021 – Seba, SQ1SGB will again be active from Halley VI(a) Base, Antarctica as VP8/SQ1SGB starting November 18, 2021 and staying until January 31, 2022. During his stay, building of a rhobmic antenna (primarily for aircraft comms on 40m) is planned. This was also allow Seba to transmit on that band when time permits. Check 7190. QSL via EB7DX.

We are raising a Formal Complaint to the Falkland Islands’ Communications Regulator’s office on behalf of Mr Sebastian Gleich, a Polish radio amateur, SQ1SGB, currently operating as VP8/SQ1SGB in the British Antarctic Territory (BAT). A letter authorising me to act on his behalf is attached.

We consider that the ‘Informal Phase’ of the Complaints and Appeals Policy has been concluded in the dialogue between Mr Gleich and the Regulator (attached).

Acting on behalf of Mr Gleich, Alan, VP8PJ and myself, sent an email to the Regulator on Friday, 3rd December 20121 entitled “Urgent: VP8/SQ1SGB operation in BAT” (attached).

We asked that the Regulator withdraw the “cease all use of callsign” Directive to Mr Gleich”. We consider the Directive is contrary to Ofcom’s 28th January 20212 guidance for amateur radio operation in BAT. We would assume the Regulator would be aware of this guidance directly from Ofcom or its publication on OpenFalklands in January 2021 (attached).

We are raising this Formal Complaint as the Regulator has not responded to this email by the end of play of Friday 10th December 2021.

There is a great sense of urgency in this matter as Mr Gleich is only visiting the Halley Research Station for two months over Christmas 2021. Any delay in withdrawing this Directive would severely disrupt his privileged and rare Antarctica amateur radio activities.

The sense of urgency is significantly increased in that this Directive effectively makes all communications made by other radio amateurs currently using a VP8 callsign in Antarctica supposedly illegal. However, this is a temporary situation until VP0 licences can be issued.

We require that Mr Gleich be notified that the Directive to “cease all use of callsign” will be withdrawn by Friday 17th December 2021.

We are disappointed about having to raise a Formal Complaint to resolve this issue, but we hope this can be achieved with no further action. After all, this is just a hobby but one taken very seriously worldwide.

We have been made aware of your recent communications with Mr Sebastian Gleich, a Polish radio amateur currently on duty at BAS’s Halley Research Station in the British Antarctic Territory (BAT).

The communications are regarding his use of the callsign VP8/SQ1SGB from the above location. Indeed we were first in contact with Seba about what callsign he should use on his next trip to Halley back in 2020. There is still much confusion and lack of understanding about this issue in the broader amateur radio world.

In your initial email to Seba, you state:

“I have been made aware that you are:

I am therefore instructing you to cease all use of callsign VP8SGB with immediate effect. Should you fail to do this, I will be contacting the UK Foreign Commonwealth and Development Office who administer BAT, to discuss what further action can be taken.”

We assume that Seba contacted one of the few VP8 Falkland Islands resident radio amateurs who notified you of this situation.

Please be aware that Seba is NOT operating using the Falkland Islands callsign, VP8SGB, from outside of the Falkland Islands. He is doing the correct thing, following standard Amateur Radio operating practice and temporarily operating as VP8/SQ1SGB as a temporary arrangement. i.e. his Polish callsign SQ1SGB, preceded by VP8/ to indicate British Antarctic Territory. He is perfectly entitled to do this under existing CEPT arrangements between Poland and the United Kingdom regarding reciprocal amateur radio operating rights.

In his case, the VP8/ in front of his Polish callsign does not indicate the Falkland Islands. It indicates BAT as per Ofcom’s ruling on the matter.

We assume that you are aware of Ofcom’s ruling of January 2021 that the VP8 prefix still applies to South Georgia & South Sandwich Islands and the British Antarctic Territory until such time as the new VP0 prefix can be enacted. He is doing nothing wrong or illegal by operating as VP8/SQ1SGB as he cannot yet obtain a VP0 licence.

Following Seba’s questioning of your instruction via an email, you replied by authoritatively stating:

“Seba, while I appreciate that you are operating to standard Amateur Radio practice you have to understand that BAT has not been a dependency of the FI since 1985 and FI amateur radio terms and condition[s] preclude FI licences, and therefore the VP8 prefix, from being used outside the FI.

In addition, I am the authority for that policy which has been consulted on with the Islanders. And while you may be aware that arrangements are being put in place to adopt VP0, and that the FI Regulator may in due course have the jurisdiction to issue BAT licences, until then, I must ask you to stop using the VP8 prefix.”

In our opinion, your strongly-worded demand for Seba to cease the use of the callsign VP8SGB is misguided and inappropriate since this is contrary to the unambiguous guidance for VP8 radio amateurs operating from BAT as received from OFCOM earlier this year.

In earlier discussions with Seba, he clearly stated that he would not obtain a VP8 Falkland Islands callsign as he has no interest in operating from the Falkland Islands, only BAT. This is why the imaginary callsign VP8SGB is not in the current VP8 operator list.

“While neither SG/SSI nor BAT currently has the legislative power to issue call signs, when they have, we can agree an allocation with them.   Until then, call signs with the prefix ‘VP8’ will continue to identify existing stations in those two British Overseas Territories (OT), even if these OTs cannot yet assign any new call signs.”

This OFCOM guidance has been widely disseminated in the amateur radio world and was published on OpenFalklands.com at that time.

We are aware that significant progress has been made by BAT authorities to undertake the required work to start issuing VP0 callsigns. This can’t come too soon.

In the meantime, we would ask you to withdraw your demand that Seba VP8/SQ1SGB cease operation immediately and ask you to follow Ofcom’s guidelines.

We are also concerned that this situation might escalate by the reporting of “VP8SGB” to the Amateur Radio Relay League (ARRL) in the USA, which could declare that all Seba’s contacts with other amateurs worldwide as invalid as a consequence. This would profoundly damage Seba’s personal reputation with his amateur radio colleagues if this were to happen.

We look forward to your response.