I have waited with high expectation for the publication of the Falkland Islands Broadband Strategy as proposed in the March 2019 Telecommunications Week. The only associated release so far was the 25th September EXCO paper on the doubling of satellite capacity in December 2019. One of the reasons I wanted to see it was to get a better understanding of the investigation into the viability of a dedicated subsea fibre-optic cable for the islands.

The subject of a subsea cable is still a hot and little understood subject that came up time and time again in my discussions during my recent visit to the islands in November 2019. One might have thought that an understanding of the issue would have been put to bed by now? 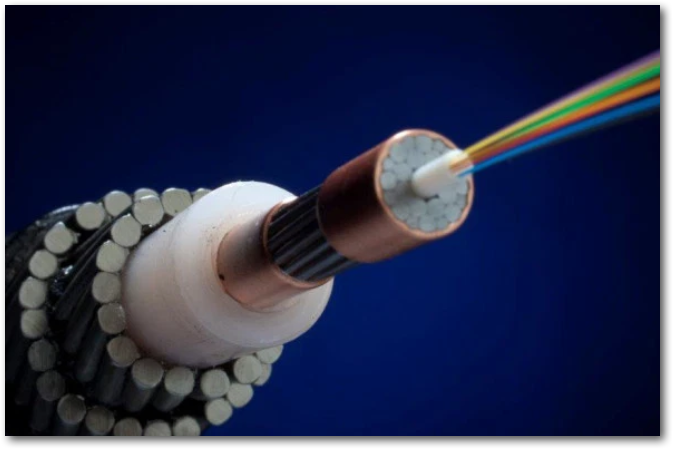 I first wrote about the possibility of using a subsea cable to provide the islands with a high-performance Internet with my first OpenFalklands posts (1) ST HELENA’S SUBMARINE CABLE and (2) FIBRA OPTICA AUSTRAL; CHILE’S CABLE TO TIERRA DEL FUEGO. There was nothing revelational in these posts as the subject of subsea cables had been the focus of much discussion by anyone with interest in Falkland Islands’ telecommunications for the last two decades.

The conclusion of my posts, not unexpectedly, was that the provision of a dedicated Falkland Islands subsea cable to the Falkland Islands would be unaffordable, i.e. due to extremely high capital and ongoing operational costs. Does it matter whether initial capital costs are £50m, £100m or £200m? Not really. Such costs could be reduced by possible government grants or partnering with the MoD, but we remain in the dark about the possibility of such financing options. However, even external financing help would probably not make a dedicated subsea cable more tenable.

As an entrepreneur, I have spent my life pushing for change, so I would never think or say that anything was impossible. Options should be continually evaluated and re-evaluated due to the rate that technology continually changes. This is no more so than with subsea cable and satellite technologies.

The first public reference to an investigation into a dedicated subsea cable came on Monday, 18th March 2019, during the 2nd Public Annual Telecommunications meeting. You can hear the reference at minute 9:00 below.

It was stated that discussions were ongoing, but details could not be provided due to “early-stage discussions” and “commercial sensitivities”.

Following this, there is silence until Penguin News, on Friday, 4th October 2019, leads with a front-page article entitled £3 million from Government to boost broadband provision” following a FIG public announcement. The extract referring to a subsea cable is below:

The subject was also referred to in the October 2019 FITV interview by FITV’s reporter, Tom Stockting at minute 7:00 as can be seen and heard below:

I’m not at all sure why BT was involved (or even seriously responded) in the Request for Information process, as the statement “one routed from the UK” is misleading. BT would certainly not be a viable company to build a cable to the Falkland Islands. There are already several subsea cables that land in Brazil, so a new cable would be routed from there not the UK. However, whether any of those companies would respond to RFI or RFQ is another matter.

I need to say that I do not disagree with the public statements made about the conclusions reached about the possibility of laying a dedicated subsea cable to the Falkland Islands. But, let’s be clear about this, advances in subsea cable and satellite technologies are probably the most written about and discussed subjects by vendors and media on the Internet. There is little that is “commercially sensitive” and now that discussions have ceased there is an opportunity for FIG to be more open about their findings.

Yes, of course, subsea operators will not talk in public about costs other than under a Non-Disclosure Agreement (NDA) in discussions with potential customers. But this does not mean that FIG should not issue a formal report on the investigation to put this subject to bed for the foreseeable future.

I am disappointed that after spending so much time, effort and money on ‘consultants’ / ‘experts’ on the investigation and meetings in Guernsey, only a few thin off-the-cuff remarks about unaffordability have been made by the Falkland Islands Government (FIG) in the public domain.

This subject is critically important because it effectively dictates that telecommunications to the Falkland Islands will be supplied by satellite(s) for decades to come.

As this is a subject that will undoubtedly keep on recurring in coming years, I would urge the Falkland Islands Government publish a public paper that details the investigation and explains why the conclusions have been reached that the provision of a subsea cable is unaffordable. It should at least, discuss what “economic models” were considered as mentioned in the Penguin News.

Surely there is an expected obligation to provide a public report (with quote redactions) would be expected for all other significant Falkland Islands studies undertaken especially where multiple consultants were involved? Just stating that it is unaffordable is insufficient.

I would recommend that this report be issued well before the 3rd Communications Review public meeting in March 2020.

What do you, readers, think? 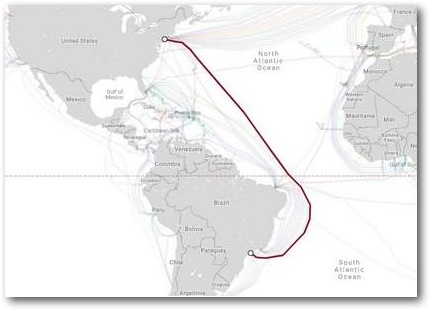 To understand how technologically and financially volatile the subsea cable industry can be in practice and how the industry is changing due to the dominance of the sector by Facebook and Google, one only has to look at recent events at Seabras.

Seabras who build a subsea cable from New York to San Paolo has filed for Chapter 11 restructuring on December 22nd 2019. Seabras only raised $500m finance in 2016. This has been directly caused by the advances in fibre technology that occurred in those three years.

Seabras has 6-fibre pairs and was designed for a maximum capacity of 72 Tbit/s (72,000 Gbit/s). Whereas newer cables being constructed by the likes of Facebook, Google and others now have a maximum capacity of 320 Tbit/s which drives capacity lease price expectations down around the world. This left the Seabras cable between a rock and a hard place like many other cable operators.

This is just not the time for a realistic business case to be developed for any small-scale subsea cable, let alone one that is 100% dedicated to the Falkland Islands. Now, if a cable were to be planned that connected the east and west coasts of South America south of Terra del Fuego, then things could look dramatically different. This could bring the same visionary opportunity to the Falkland Islands as jumped upon by St Helena government. Unfortunately, nobody can predict whether this might happen or when.

Perhaps something was lost in the simplification or interpretation of findings, but I find the final paragraph of the October 4th Penguin News report astonishing and irrelevant. This is for three main reasons: 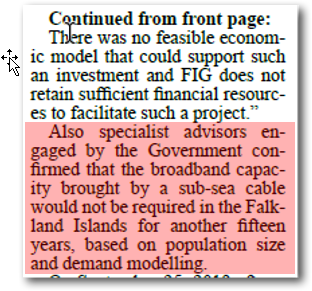 (1) Looking back, the Internet was still in its early days of adoption fifteen years ago; the majority of applications now in extensive use and the dominant companies providing them hardly existed. Looking forward, it is impossible to envision what the Internet will look like in fifteen years time let alone predict “demand”. Even three years is near impossible with the current rate of change.

(2) Internet, applications, telecommunications, subsea fibre and satellite technologies are changing at ever-increasing rates so how can any statement like “the broadband capacity brought by a subsea cable would not be required” be made?

(3) I would love to see the underlying “[Falkland Islands] population size” and demand forecasts adopted in the referred-to “demand modelling” exercise to justify this conclusion. How is it at all even possible to forecast usage in five, ten or fifteen years time when it is based on 2018 usage in a highly quota-constrained Falkland Islands?

I am personally unable to envision any experienced “specialist advisor”, “expert” or “consultant” who understands the Internet really believing that this is a sensible or supportable view to articulate? This concern was reflected in questions asked in the 2019 2nd Communications Review meeting.